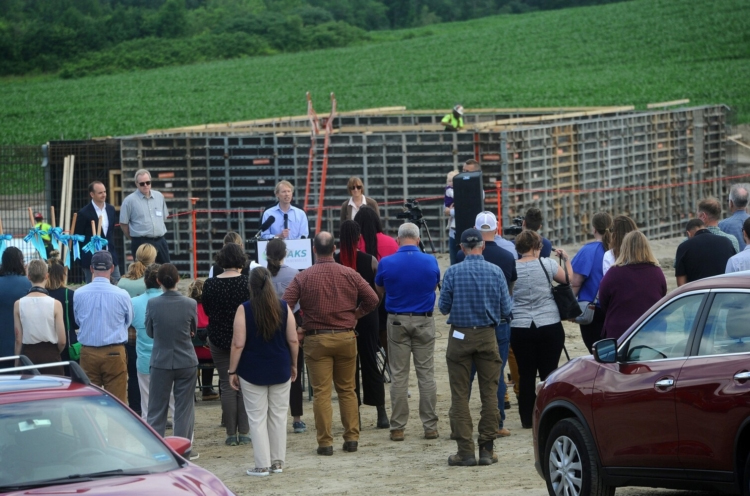 They’ve gone and dung it: Clinton ‘digester’ to produce natural gas from manure

CLINTON — In a first for Maine, a division of Colorado-based Summit Utilities is building an anaerobic dairy digester at a cost of at least $20 million that is to use manure from in-state farms to produce natural gas.

Several state and local officials gathered Wednesday to mark ongoing construction of the digester at Flood Brothers Farm in Clinton, which is often called the dairy capital of Maine.

“We’re taking a bad thing, emissions, and we’re turning it into a good thing, energy,” said Angus King III, President of Peaks Renewables, the Summit-affiliated company spearheading the effort. “The cows get to keep doing the magic that they do, turning grass into the milk that we all love, and now they’ve added a second trick to their repertoire.”

The digester is expected to be completed early next year, according to Ryan Morris, the construction manager.

Once the digester is operational, Peaks is to collect cow manure from dairy farms in Maine and bring it to the Clinton farm, where it is to be heated and decomposed, creating biogas. The gas is then cleaned to reach pipeline quality, before moving into the existing pipe system in the area.

King is a son of U.S. Sen. Angus S. King Jr., I-Maine, and served as assistant to the chief of staff in the administration of President Bill Clinton.

The digester takes the methane, a potent greenhouse gas, that cow manure naturally releases and turns it into biomethane, or renewable natural gas. The digester reduces methane emissions by capturing the gas and turning it into an energy source.

A similar project began several years ago in the Penobscot County town of Exeter, although that digester uses manure and food waste to create electricity, which is then sold to the power grid.

Peaks estimates the Clinton digester will divert the equivalent of 28,000 metric tons of carbon dioxide, about the same as taking 6,500 cars off the road for each year the digester runs.

Farms would not pay to have manure taken away, Morris said, and the digester would use what is left of the manure to create animal bedding, while the remaining liquid can be used as fertilizer. The bedding and fertilizer would go back to participating farms.

The digester is expected to have plenty of space for the manure. It is to hold about 4 million gallons of manure at once, and is expected to digest 175,000 gallons a day, according to Morris.

The gas itself is to be purchased by a Peaks-affiliated company, Summit Natural Gas of Maine, and be used to provide gas to its customers in the state.

The project is expected to generate 130,000 MMBtu of gas a year, about 45% of Summit’s residential demand in Maine. MMBtu stands for Metric Million British Thermal Unit, which is traditionally used to measure heat content or energy value.

It is difficult to predict the final cost of the project, Morris said, but he estimated it could be $25 million. Peaks has received a few grants to assist with the project, including one from Efficiency Maine and another from the Maine Technology Institute of Brunswick.

Numerous supporters of the project spoke at the event Wednesday, including Jeffrey Towne, chair of the Clinton Board of Selectmen; Dan Burgess, director of Gov. Janet Mills’ Energy Office; and U.S. Rep. Jared Golden, D-2nd District.

Jenni Tilton-Flood, part of the family that owns Flood Brothers Farm, said when people think about agriculture and dairy farms, they often consider them a thing of the past. But that is not the case.