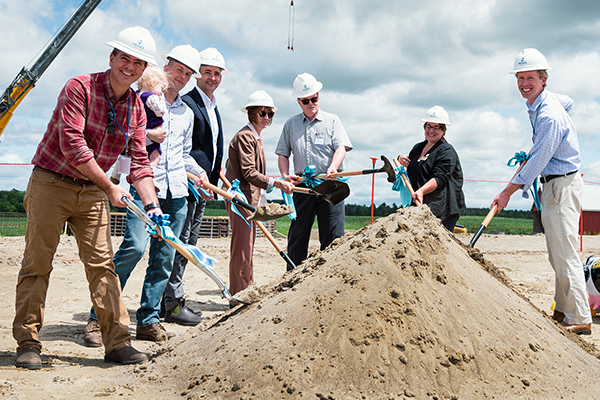 Dairy digester in the works to turn cow manure into gas, heating homes

CLINTON, Maine — Flood Brothers Farm in Clinton will soon be home to what's known as a renewable natural gas dairy digester. It will be able to produce methane from cow manure brought there from local farms, and that gas will be used to heat homes and businesses in the area.

The groundbreaking ceremony was held at the farm in what's known as the Dairy Capital of Maine Wednesday morning. Peaks Renewables, a subsidiary of Summit Utilities is overseeing the project.

Jenni Tilton-Flood said this will reduce the toll dairy farming takes on the environment.

"What we're doing is making sure that the goodness outweighs that toll. That's the way we have to look at everything. Everybody's gotta eat and every cow's gotta poop, we're gonna make sure it works right for everybody," Tilton-Flood said.

Angus King III, son of Senator King, is the president of Peaks Renewables.

"We take the manure from about 5,000 cows in this region, we bring all that manure into the digester. It sits in the digester for about a month. In the digester it creates gas, and that gas comes out into the pipeline system and heats local homes and businesses," King said.

King said the remaining manure in the machine will be distributed to farmers to use as fertilizer for their fields.

"It's just a win-win type project. Good for the farmers and good for the state and for our energy needs as well," Rep. Golden said.

King added he's proud to see this project that's been years in the making finally coming to life.

"A project like this is a great way to remove emissions from the fuel that we all use every day," King said.

King expects the project to wrap up by the end of this year or early next year, and the machine should be producing gas for homes by February 2023.